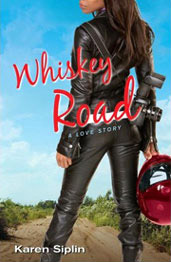 After one too many run-ins with irate A-List celebrities and their bodyguards on the streets of Los Angeles, paparazza Jimi Anne Hamilton has decided to throw in the towel. But when she planned to ride her luxury BMW motorcycle from California to New York, she didn't count on having her cross-country adventure interrupted by motorcycle thief. After the brutal attack, which sees both her motorcycle and camera equipment stolen, she finds herself left with only her helmet, a few clothes, and a bag of money she swiped from her attacker. Disillusioned and hurt, Jimi chooses to recuperate in a nearby town where she meets Caleb Atwood, a local contractor fighting his own demons. Jimi and Caleb make a mismatched pair: black and white, highbrow and low. But in Caleb, Jimi believes she has found someone who is as much of an outsider as she feels.

Both outsiders in their own way, both badly bruised — literally and figuratively — Caleb Atwood and Jimi Hamilton meet in a rural New York town. He lives in the next town over and is there for lunch to momentarily escape the people who've known him, and his problems, all his life. She is there after an accident and the theft of the motorcycle she'd ridden across country from L.A. A young black woman originally from Brooklyn, now making a living as a paparazza, Jimi is unhinged by her latest triumph. Caleb is a local white man, a contractor, just getting over the fact that his wife has left him for good. The tentative relationship between Jimi and Caleb blossoms as they discover what they have in common — a love of motorcycle riding, the freedom it represents, and a relentless feeling of not belonging anywhere. Will her upper-class brother accept Caleb? Will his working-class friends accept Jimi? As the relationship develops, secrets unfold and race and class issues play themselves out in a small town with its own particular dangers.

When paparazza Jimi Anne Hamilton shows up in rural Darby, NY, with a bruised face and a duffel bag full of cash, she is only looking for a quiet place to lick her wounds. She never imagines that accepting a ride from a handsome white contractor with a knack for angering jealous husbands will leave her as breathless as the celebrity chases that made her famous in L.A. Big-city, African American Jimi and blue-collar Caleb are both trying to rebuild their lives. They soon learn it's one thing to rebuild, another to reinvent. Jimi's wealthy brother doesn't like her slumming with the locals, and Caleb's recently paroled brother is intent on proving that a bad man can't change. One of the strengths of Siplin's (Such a Girl) contemporary interracial romance is a hero who is as well developed and interesting as the leading lady.